DITO Telecom Is Ready For Rollout This March 2021

Recently we have a very good news. Last February 22, 2021: The National Telecommunications Commission (NTC) confirmed that DITO Telco passed its first technical audit, delivering an average speed of 85.9 Mbps for 4G and 507.5 Mbps for 5G.

Based on its agreements with the government, DITO is initially required to build 1,300 towers to cover 37 percent of the population with an Internet speed of 27 Mbps by January.

The auditor focused on a percentage of the identified 1,600 sites that cover 8,800 barangays in the country.

Listed below are the internet speeds recorded per distance:

In my old post, DITO Roadmap and Updates, where you can about how they been planning things just to achieve this.
Mark your calendar, as officially announced by DITO Telecom, commercial launch will be March 8, 2021.
But according to DITO, the first areas of operation would be 17 cities and municipalities in Mindanao and Visayas.
Dito chief administrative officer Adel Tamano said, “Mindanao and Visaya are going to have the first roll-out. He also said. "before June, we will already be available throughout the country."

It’s a step-by-step start. We will launch in Mindanao for the first time. There is a nostalgic explanation why we were the Mindanao Islamic Telecommunications Company until DITO became DITO. In reality, it was built to serve the poor areas of Mindanao. We believed it would be ready to launch, Tamano said. 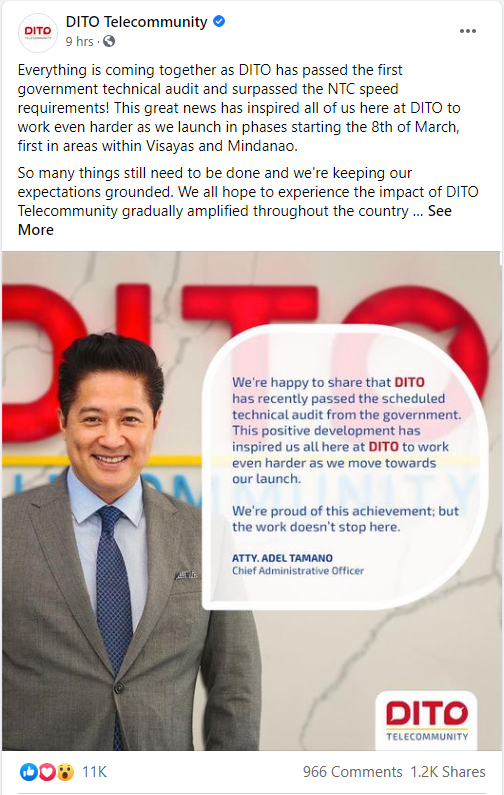 The telecommunications network owned by Davao businessman Dennis Uy announced it is ready to onboard new users of its mobile network in two weeks,
SIM cards will be made available to Davao, Cebu, and 15 other towns and cities. Okay, So the residents in select parts of the Visayas and Mindanao may sign up as Dito Telecommunity's first subscribers by March 8, and then with nationwide services before June.
We don't expect for popular endorsers. as per Tomano, their endorsers will be consumers. Yes! that is right, we as DITO public users. Since we will now going to experience a world class telecom services.
Source: No K-Pop endorsers for Dito’s March 8 rollout in VisMin, available nationwide by June https://www.cnnphilippines.com/
We will see DITO promos soon when DITO started on March 8 next month.

February 23, 2021: PLDT, DITO ink deal on construction of a transmission facility interconnecting their subscribers.
According to PLDT, hopes to finish the facility by end-March, just in time for DITO's commercial. rollout.
Read: Dito signs interconnection deal with other telcos ahead of rollout www.cnn.ph
This one I want to clear cuz there are some make this an issue or even misleading others as well.
Telecommunications, interconnection is the physical linking of a carrier's network with equipment or facilities not belonging to that network. The term may refer to a connection between a carrier's facilities and the equipment belonging to its customer, or to a connection between two or more carriers.
This is very normal and necessary as it only says that both can contact each other. Like for example, you're a Globe user trying to contact a Smart user.
PLDT and Globe also have a interconnection agreement as well, so both can cross contact to each other.

March 2, 2021: DITO Telecom officially released the list of first 15 cities from Cebu and Davao that will experience their services.
These are the list of areas in the Visayas and Mindanao where its services will be initially available at the time of its rollout on March 8, 2021 in key areas in the southern Philippines are the following areas:

Here are the initial list of DITO Telecom partner stores. According to DITO, their list of partners is growing fast.

Here's the initial list of Compatible Handsets. As per DITO, they will be adding more phones to this list very soon.
Note: DITO SIM Card will work better in a 5G ready smartphones.

This update as of March 8, 2021. Today is the initial launch of DITO Telecom. Currently been waiting for their Website to go be more functional.
Posted by ~Admin at 8:29 AM